Almost everyone dreams of being rich, or at least of having the financial resources to live comfortably. The pathway to wealth envisioned by many people involves becoming famous, either as a pro athlete or entertainer. The odds are long, even for the most talented individuals, but the dream persists. 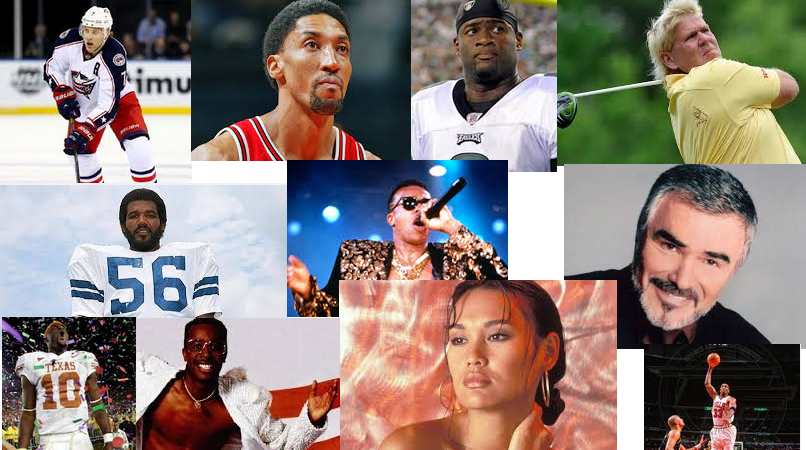 Sadly, many of the people who attain that much sought after level of success and wealth end up in financial ruin. Athletes are particularly vulnerable. According to Sports Illustrated:

This is even more shocking when you look at the minimum salary for each league:

That’s 10 times the median personal income in the United States. The average  NFL career is three and a half years. In the NBA it is four and a half and in baseball it’s a little over five and a half. At the low end, the average NFL player will earn over a million dollars in his career. It would take the average worker 35 years to earn that much. Yet for many athletes and entertainers, as soon as the money comes in it’s gone. Here are just a few examples:

Currently a defenseman for the Columbus Blue Jackets of the National Hockey League, Jack Johnson filed for bankruptcy two days before that start of the 2014/2015 season, according to The Columbus Dispatch. Though he has earned over $18 million in his nine-year career, he is broke. The Dispatch reports that Johnson’s parents squandered the money – although he did drive to his bankruptcy hearing in a BMW, leaving his Ferrari at home.

This player’s story  goes from riches to rags and back to riches. Dallas Cowboys great Thomas “Hollywood” Henderson saw his  post-football life spiral out of control, leading to a 1983 arrest on drug charges. After serving eight months in jail, he turned his life around. In 2000 he hit the Texas lottery for $28 million. He used the money to start a charitable organization and now tours the country as a motivational speaker.

Along with Michael Jordan, Pippen helped the Chicago Bulls win six NBA championships. He earned over $120 million during his career, but a series of bad investments doomed him financially. Among his unwise purchases was a jet that cost $4 million. He had to pay an additional $1 million to get it back into flying condition.

As the third overall pick in the 2006 NFL draft, Vince Young went on to earn over $26 million, after taxes, and wound up broke. According to Fox Sports, the former Tennessee Titans quarterback spent $5,000 a week at the Cheesecake Factory and ran up a $6,000 tab in just one night at T.G.I. Fridays.

John Daly’s outlandish lifestyle was his undoing. Between 1991 and 2006 he gambled away over $50 million, according to ThePostGame.com. This, along with four failed marriages and child support payments, helped erase the rest of his fortune. He’s more fortunate than some other athletes, though, as he is still able to play. He currently makes about $150,000 a year.

After borrowing money from several members of the Oakland A’s baseball team to start his own recording label, Hammer went on to sell over 50 million records worldwide and was once worth $30 million. But living large and employing a big staff left him $13 million in the hole.

One of the biggest movie stars of the 1970s and 1980s, Reynolds once was part owner of a pro football team. Divorce, a failed restaurant chain, and other bad investments led to him to file for Chapter 11 bankruptcy protection in 1996.

With a steady gig on the hit soap opera General Hospital, this young Hawaiian native landed a role in the hit motion picture Wayne’s World, which really heated up her career. To get out of her General Hospital contract, according to Business Insider, she filed for bankruptcy and claimed that her salary wasn’t keeping pace with her movie star lifestyle. She lost the suit and squandered her movie earnings while doing so.

On the other hand, there are a lot of athletes and entertainers who leave the playing field and the spotlight and go on to live comfortably. Among them:

A star on M*A*S*H*, one of the most successful sitcoms of all time, Rogers left the series after only three seasons. He appeared in a few other shows, but none as successful as M*A*S*H. During his time on that show, he began to invest in the stock market and in real estate. Now a very successful investor,  he hasn’t acted since 2003.

In his nine-season career, Rick Mirer played quarterback for five different teams – none of which had a winning record. He founded a successful winery once his playing days were over. With nearly half a million dollars in annual sales, the winery also helps support The Mirer Family Foundation – a charity that supports youth education and health programs.

His name might not ring a bell, but you may have heard some of Nick Lowe’s songs. His two most famous are “Cruel to be Kind,” which earned him his only appearance on the U.S. top 40 (#12) and “(What’s so Funny ‘Bout) Peace, Love, and Understanding,” most famously recorded by Elvis Costello. Though that song wasn’t even released as a single, it has made Lowe millions.

That’s because a version by Curtis Stigers appeared on the soundtrack for the 1992 film The Bodyguard, selling 17 million copies in the U.S. alone. The song has been covered by dozens of other artists too, as have other songs by

Lowe, but the royalties from The Bodyguard netted him almost $1.5 million.

Some links on this page may be affiliate links, if you make a purchase following the links, I may earn a commission. Read affiliate disclosure here
« Letting Experts Manage Your Investment Dollars- A Case for Funds
Do You Know Everything about Financial Freedom? »