Not long ago I was bragging about the newest online coupon app, Coupon Sherpa. I never clip coupons but lately I started using coupon Sherpa a lot. But there has been problem since then. 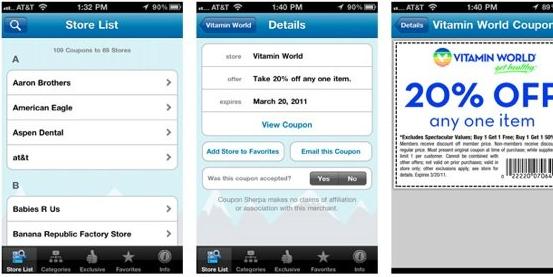 I think my problem at the grocery store is that I walk down every aisle and look at all the deals. I don’t get them all, but I do get some things that are not on my list.

Example 1 – We saw a deal 50% off of custom framing orders at Michaels, we framed a cross stitch wall decoration which SMB finished long ago. It costed $80 even after the 50% discount. Now when I think about it, we should have gone to Walmart/Target ready-made frame aisle and would have picked a appropriate sized frame. It’s coupon Sherpa deal that costed us 10 times more money.

Example 2 – Coupon Sherpa offered free admission to Sam’s club without being a member for a day. We were thrilled as usually, as we prefer to buy rice, cooking oil, cereals , etc in bulk. We are not members of either Sam’s or Costco. We are not members because we could never saved more than the membership fee without spending on items we generally don’t need.

So, one day, armed with the free admission coupon, we went to Sam’s and ended up buying things we never use. At the end we have no clue when extra bottles of tomato sauce, a set of 20 tooth brushes, two big packets of chocolates and a huge sized jumbo shrimp would be used up. And we had to throw cookies out due to fungal infestation within a week, we couldn’t finish the pack timely.

Example 3 – We needed a queen bed set for the guest room. Armed with a 20% off coupon at Bed, Bath and Beyond we arrived at the store and ended up buying a lot of things from soap container to table runner. Eventually what was supposed to be picked up from Target at around $80, costed us more than $120 from BBB.

If I think it through, this might be the case with many of us. Coupons originally is supposed to save us money, rather what I see – Coupon Sherpa is in-fact costing me more money. This is the basic tenet of everything coupons. Manufacturers and distributors print coupons to facilitate buying, increased spending. It’s also a way of advertisement. The sooner we realize we can use coupons to our advantage.

I had become so addicted lately to Coupon Sherpa that while driving, I used to open the app to check near by deals, as if I had too much money to spend in the first place. Without it I had no clue that a great promotion going on at Banna republic. Well great deal, jeans for just $9.99 head over and buy it. When SMB reminded me of the pair of jeans I bought just a month ago, I realized the potent power of this coupon thing.

Coupon Sherpa is a great tool, it saves a lot time in clipping coupons. If you are in to couponing, start using coupon Sherpa, forget news papers and coupons in your mail box. The app tracks your location and brings all the deals and discounts going on in nearby stores.

But, before you develop a habit I did, learn to use it smartly. Buy the things you want to buy in first place and then search for the places offering deals on that item. Suppose you want to buy a pair of jeans. you visit a mall and run the Coupon Sherpa app, it should list deals from all the stores there. So, you are informed and quipped to make a decision as to where to buy it and at what price.

Smartphone also come with a price checker app. Those are particularly useful for price check on electronics or, anything which is sold in a box with a bar code attached, from Granola bar to HDTV. You can scan the bar code and run the app to determine which store sells it at least price.

You may be like me who didn’t clip coupons before, because it was time consuming to find, tear and store paper coupons. Coupon Sherpa made finding coupons like a cake-walk. As a result, I became a victim, now my job is done that I shared my mistake with you. My other job and liability is towards my own finances, that is to exercise discipline and self-control.

Whats your coupon strategy? Are you over spending with coupon or are you using it optimally and buying only the things you need with coupons?

Some links on this page may be affiliate links, if you make a purchase following the links, I may earn a commission. Read affiliate disclosure here
« 101 Ideas for Men’s Fashion That will not Put a Hole in your Pocket
How to Avoid Online Dating Scams »