Warning: This is a philosophical post, not based on hard-facts. Many of you may disagree to most of the content, but it sure can induce thoughts in your mind.

As a religious term, Karma refers to intentional (usually moral) actions that affect one’s fortunes in this life and the next. For simplicity, we will only consider the causes and effects in this life time.

Karma is a concept common to Hinduism, Buddhism and Jainism, For the purpose of this article we will consider the karma as its known in Hinduism. 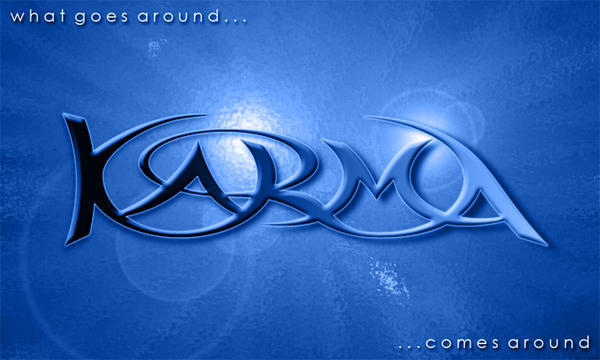 I apologize to religious people if I miss-state or misinterpret religious matters.

The concept of Karma or “law of Karma” is the broader principle that all of life is governed by a system of cause and effect, action and reaction, in which our actions have corresponding effects on the future.

In many ways its same as Newton’s third law ‘Every action has its equal and opposite reaction’. The similarities end there.  A Karma has far-reaching effects and causes than a simple solitary action.

As Karma is about the set of actions, it can be good or it can be bad. A Good Karma goes further to establish your values in front of others. On the other hand, a bad Karma may prevent you from succeeding.

Your bad Karma does, in fact, keep you from getting over debt and from becoming wealthy. A bad Karma can make your personal life and personal finance equally miserable.

This is very powerful – You might not agree with this, but the world’s oldest religion and world’s oldest books believe in Karma to extend to our future lives. Hinduism talks about having 7 lives in an incarnation. The people who appear unfortunate and needy by birth are believed to have bad Karma from their previous life.

At the same time, the religion also states that we shouldn’t ignore the needy assuming its their bad Karma which is responsible for their situation. A good Karma is to help them get on to their feet.

Examples of Good and Bad Karma in Personal Finance

Let’s check some of the good Karma and bad Karma related to personal finance. I am not an expert, the following is just my way of interpreting Karma.

Good Karma – We should help poor, we should give to charity. We should distribute our wealth. A sincere blessing enhances good Karma.

How often we see lucky people around us? We wonder why they have gotten all the luck. As per Karma, they are believed to have good Karma from their past lives.  Inspired yet?

Now, I feel debt is good for in organic growth. You probably can’t afford to buy a home unless you take mortgage. A business can’t produce goods unless it doesn’t issue debt papers and bonds.

Good Karma – Providing good care for family is a good Karma. Ignoring your family isn’t one.

As a provider, your primary objective of life is to provide for your dependent. Taking refuge to excuses, alcoholism, drugs prevent you from taking good care of your family.

Earning extra to provide family better is a good Karma. This is what we live for, this is what the orders are.

Bad Karma – Being selfish with money is bad Karma. Telling lies about money and hiding it are Bad Karma.

Good karma – providing a better living condition for others is a good Karma.

Stopping waste, reducing pollution and making environment greener are good Karma. Next time you plan a tree, consider doing a Karma. Let’s leave a better planet for the generations to come. Who get’s benefited apart from the next generation? It’s You!

Living an active life can bring in good Karma as you are fulfilling life’s purpose.

Good Karma – Paying down money you owe is a good Karma

Running away with money is no solution. Getting head over toes in debt and declaring bankruptcy can help you in short-term but, essentially you are not setting good precedence. You have bad Karma if you have done that.

Bad credit history is forgotten and written off in 7 years, a bad Karma doesn’t go away! When you have money to pay off pay off promptly, do not hold on to some one else’s money.

Bad Karma – Sabotaging some one’s success is a bad Karma.

False accusation, creating barriers for others to prevent them  from becoming wealthy are examples of that. Compete legally with others. If your neighbor is richer, make it a motivation to out-pass them by earning more, not by taking wealth away from them.

Declining others asking for your help, just out of jealousy, is definitely bad. If you can help some one with your knowledge and experience you should not hold back.

Good Karma – Creating wealth and making others wealthy is a good Karma.

Look out for opportunities to start entrepreneurial ventures that can generate employment. Stop abusing the rich (1%), be one of them. Only when you become one of them and leave your mark.

Wealth benefits human kind, a value creates wealth and wealth goes on to create values. Wealth enhances our living condition and for the people surrounding us.

We have seen it so many times in the past, a few wealthy employer changes the landscape of a city. Consider a Detroit, a Seoul and the Silicon Valley.

Stealing money, hiding income, tax fraud by claiming false deductions are the examples come to my mind. There is a good way and a bad way of doing things. Always choose the good one.

Increase your income to be rich, don’t reduce taxes by claiming more breaks than you are supposed to.

Claiming false insurance benefits is one heavily used bad Karma. Be truthful, else it would hunt you sooner.

The Karma is like a fruit, which has seeds that grows into trees. Which in turn yields more fruit. This process continues. Karma spills the seeds of Karma on and on…

Your Karma can make you wealthy, this life or the next. Get inspired, develop good practices, grow yourself, help others grow and move on!

Some links on this page may be affiliate links, if you make a purchase following the links, I may earn a commission. Read affiliate disclosure here
« IRA vs 401(k), Should You Rollover?
Weekly Roundup – Hectic Work »