There is nothing quite as bonding in my mind than a camping trip, especially when you are not a camping family. Those of you that were raised to camp, those that know all the right ways to do things and all the right things to pack may not know what I am talking about. But I am sure that there are those of you that were not raised up camping that has tried your hand at it like we have that know firsthand what I mean. 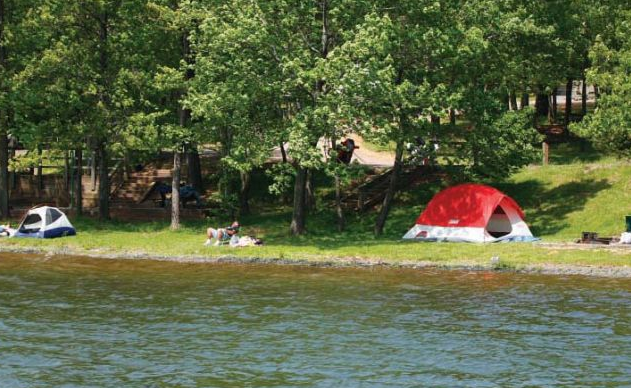 My dad did not camp, or have picnics, or swim in public pools. He did not like to rough it, eat with ants or flies, and he did not want to swim in a public pool. I will just leave it like that; I won’t go into his explanation because it is not pretty. He did like to fish so we spent some time at the lake. Mom, on the other hand, loved to hike, picnic, garden, and generally any outdoor activity.

Except camping. I guess Mom decided not to go that one alone since it consists of sleeping in a tent at night with three small children.

So, when my daughter was about three I was a single parent and I wanted a vacation. We did not have a great deal of money so I was trying to come up with a way to afford something better than a day trip to a nearby park. I got my Mom involved since she was also alone and she took care of my daughter while I was at work.

I thought camping might be a good idea and if we took our own food and cooked ourselves we could afford to drive to a place I had heard about and wanted to go visit in New Mexico. The name of the place is Cloudcroft and it is about 8,600 feet in elevation, one of the highest in North America. Sounded like a great idea! We could afford the gas, now all we needed was a tent and a camping stove.

So off we went to get a tent. A three-man tent sounded good, after all, if it is big enough to fit three men into then two adults and a toddler will do just fine, right? We got all our supplies together and I even thought ahead enough to bring some cushions for the bottom of the tent, after all, Mom wasn’t any spring chicken and she would need the padding.

We were off on our adventure and decided we would just take our time and see the sights along the way. The first night was fine, we set up the tent and made camp and in the morning we took it all down again.

The second night was a little more trying and by the third night, we thought we were going to lose our minds but thank God we were going to stay there for at least three or four days. We had not really thought about the picking up and putting down of camp on the way there and back.

We had prepared for cold weather even if it was July since we knew the elevation was so high. At least our minds were prepared, our bodies not so much. It should have been a clue when we arrived at our campsite that there were no other tents there, only recreational vehicles.

During the day it was really nice because the temperature was in the high sixties and low seventies. So we set up camp happily and found out that there was a roaring bonfire every night where everyone sat around and sang songs and got to know each other. Sounded like fun! Only the rest of the people got to go home to their warm RVs.

We wore several layers of clothing and had my little one in a snowsuit to boot. We topped that off with three or four blankets under and over. We put my daughter in the middle for protection and all through the night she would raise her legs in the air and pull down all the blankets. We didn’t get a lot of sleep and before you know it the sun was waking us up which by the way we were more than happy to see considering the temperatures.

My Mom was a trooper and got right up and started a fire for coffee and hot chocolate. As we were preparing breakfast our closest neighbors came out and asked my little girl if she wanted to come into their RV to warm up and have something warm to drink. She even got to watch cartoons which immediately made our neighbors her favorite new friends.

During the day it was just beautiful, everything was fresh, crisp, and lovely. We would take drives in the mountains and find gobs and gobs of fresh wild blackberries to pick. The sights were breathtaking and the people were all lovely. There were great places to hike and loads of things to see.

The camping park we stayed at had a lot of pets that roamed the park entertaining and sometimes terrifying the guests. They had a one-eyed cat and a huge turkey that really stuck out in my mind.

We found out rather quickly why the cat only had one eye, he had crossed the turkey at some point. That turkey was one mean bird. If anyone or anything came across his path that was smaller or weaker than him he made a point of letting them know.

When my daughter saw him she wanted to make friends but that is the last thing that was on that turkey’s mind. He chased my little girl every time he saw her until he saw me or my Mother and then he would back off. Fun times.

On our trip, we also stopped at Carlsbad Caverns in Carlsbad, New Mexico (pictured below). We had heard about the caverns and the awe-inspiring sight of the bats that left the caves each evening and thought that it would be something interesting and fun for all of us. 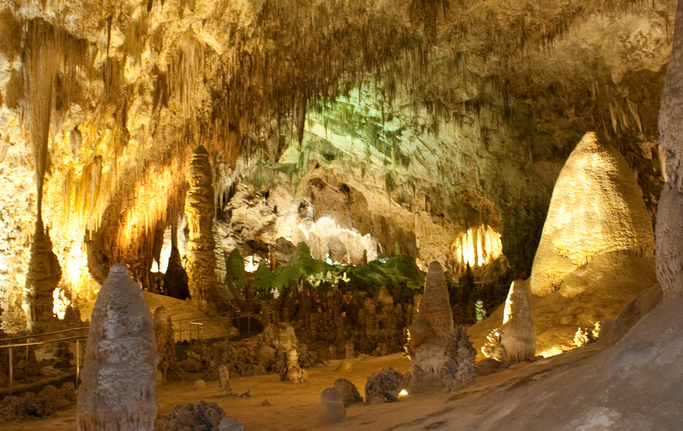 It was really nice and cool in the caves especially after coming off of the desert. The elevator ride down was no big deal but once we got down into the caves it was a bit dark and shadowy so I spent the rest of the walkthrough, which is no short trip, carrying my daughter with her head buried into my neck.

Who would have thought that it would be so frightening for her? We did not even attempt to stay for the bats!

We learned some valuable camping lessons on this trip:

I’m sure there were more lessons learned but right now I cannot think of them. We also learned that roadrunners are real, there really is tumbleweed tumbling across the plains, and the desert is extremely hot in the day time and very cold at night. And another thing we learned is that as long as you have people you love around you can not only endure but also enjoy just about anything.

My daughter still carries some of these memories around today even though she was just a wee thing. The giant killer turkey is one image she will never lose. You have got to try camping at least once in your life so that you can really bond with your family.

About the Author – This is a guest post by Liz Nelson, she is a freelance writer and blogger from Houston.

Some links on this page may be affiliate links, if you make a purchase following the links, I may earn a commission. Read affiliate disclosure here
« How To Lower Cost When Dealing With A Lawyer
Stock Market Investing For Dummies »