Ever heard the line “Consumer is the king”? When I was growing up and was in middle school, I saw my dad’s company slogan on his car. It said, “Customer First”.

This leads to my early childhood belief that big companies do think about their customers and are not solely engaged in profit making. Now, in my late mid-thirties, I better understand the dynamics of the corporate world. It’s about the balance between keeping customer satisfied and increasing profit.

Those top 1% income earners get paid for doing just that, managing money and resources to keep customers and shareholders happy.

You might tend to think they are more tilted towards shareholders, and you are right because shareholders are the bosses. We tend to agree to with your boss’s demands. Company executives are bound to listen to shareholders first. Nevertheless, if customers are not satisfied, in no time the shareholders would also become dissatisfied.

Look what happened to Netflix. Millions of their old trusted customers started fleeing. (don’t forget to check my post on why you shouldn’t use Netflix and Netflix vs. Blockbuster movie pass). This reaction of rebellion from the customers led Netflix to reverse some of the decisions and the CEO was forced to take a cut in his stock options.

Consider this recent Forsee consumer satisfaction survey of online retailers. I am not surprised to see Netflix at the receiving end with the biggest decrease in customer confidence.

I tend to believe that my Netflix posts (which receive a sizable Google search traffic) fueled an exodus of customers from Netflix as well. Now, have a look at this snapshot of a customer satisfaction survey. No doubt, Amazon is at the top.

So far, I have bought numerous items through Amazon, from dvds to a living room table. My Amazon experiences have been very positive.    I never experienced poor customer service and the prices were reasonable. 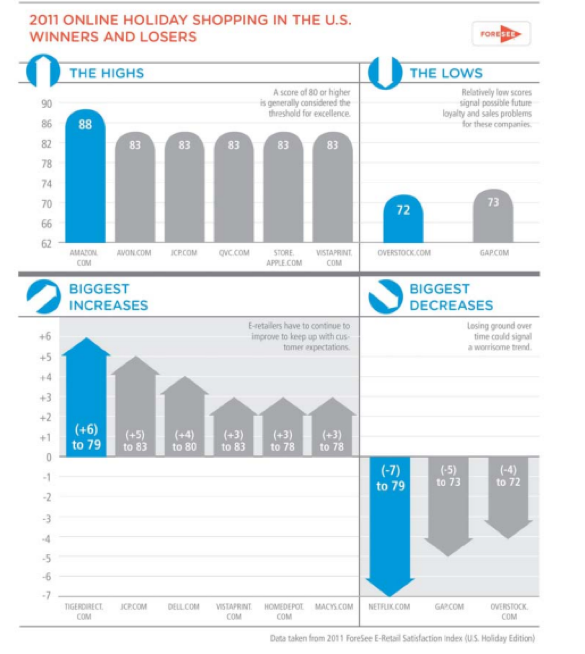 On the other hand, I see companies like local cable operators (including Comcast and Time Warner, which I used in past) or a few cell phone companies (like AT&T), who always tried to get more money out of my pocket. What eventually happened was a discontinuation of service.

Realize that you are the king

A few years ago, there were public protests against Wal-Mart when they stopped selling certain brand products. Wal-Mart eventually gave in and restocked those items. Just a couple of months back, Bank of America reversed the $5 ATM transaction fee, giving in to the huge outcry. Then the Verizon $2 online payment fee! Consumers didn’t take more than a few hours to make them realize the wrong decision.

Now, if the consumer wants to be treated like a king they should act like one.  The consumer should voice their likes and dislikes. The consumer now has a collective voice, thanks to the social media and a relatively easier access to mainstream media. A customer or a group of customers can raise their voice and have them heard by organizations globally pretty easily these days.

Consumers, unless you express your discontent, nobody, including the shareholders will take notice of your annoyance. The top 1%, executives, won’t even feel the need to satisfy the shareholders. Guess who suffers at the end!

How to lodge a consumer complaint

You don’t have to occupy a certain place in your city; you don’t have to demonstrate on street at all, you can register your unhappiness, your annoyance or your protests from your living room.  Do you know how ForSee came up with the satisfaction level of online retailers?

It’s the surveys that were conducted online and the people answered them sitting in their living room. Don’t worry if you do not have access to a survey. There are research agencies that are fed with consumer complaints received by various third-party/volunteer registrars. These agencies then produce white papers, reports, charts, and trends which are then consumed by media.

Your complaint would definitely find its way to become a data in a survey for sure, at the minimum. You should lodge complaints and state the facts with your true knowledge and understanding.

If you are a blogger, you can always write about your discontent and dissatisfaction, can’t you? Then promote it via Twitter and other social media. Believe me, if your tweet has spice in it, in no time it reaches editorial boards across media organizations.

Before lodging complaint, give negotiation a chance

Everyone deserves a second chance. I always give the provider/seller a second chance with the hope that they will learn from their mistakes. Before you lodge your complaint or raise your voice to the outside world, provide the business with another chance to provide you with better treatment or a better product.

Contact them via every outlet possible and make your points clear. If the business fails the second time, it will only add more meat to your complaint.

If you are happy with the way you are treated by a business, praise them in whatever way possible. I recently wrote an article about a good customer service at Chase. Unless we as consumers don’t encourage good business practices, there are no guarantees that it will continue.

Often positive words about a business are used as a source of the advertisement; everybody loves positive word-of-mouth advertisement. You may also receive some preferential treatment in return for your opinion.

Good words going around for a particular business makes its competitors take a note and make them improve their own business practices. Who wins? It’s you, the consumers.

Be judicious, know your powers and demand what you should deserve. At the end, you are the king!

P.S. I received an email which asked a question, whether the word ‘king’ is sexist. No. It is not. Replace it with ‘queen’ if you like, ‘king’ was just a paraphrase I used.

Some links on this page may be affiliate links, if you make a purchase following the links, I may earn a commission. Read affiliate disclosure here
« OCAAT Weekly Roundup, The Key Word Research Edition
Top Blogs of The World by Visitors »