At this blog, I only talk about our finances. Let me break the trend and give you some food for thought. This is about the economy as a whole, not our own personal economy. This is about outsourcing and the trend here in the US. If outsourcing hasn’t really impacted you yet, it will be soon. Either in a positive or negative way.

Be watchful and be acquainted with the socio-economic changes happening around you. So, important to grow One Cent at a Time.

Let me first give you my opinions here, about outsourcing, and, the recent trend of American job outsourcing. Over the last weekend, I came across three different news reports on the web. All related to outsourcing trend and the political and economic impact of it. The three articles covered the aspects of: 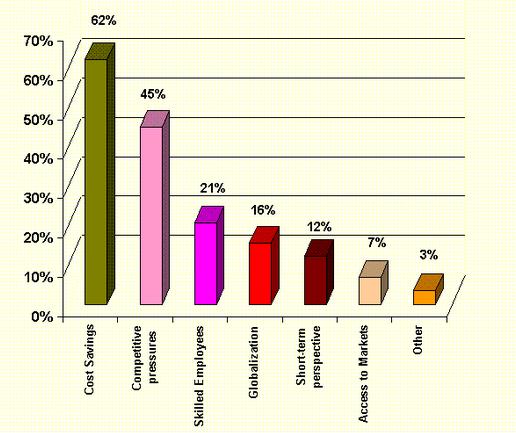 The first one went on to say that corporate profit is at the highest level historically whereas the employee wage is at lowest in terms of percentage of GDP.

Off-course by absolute margin wages can’t go down in a growing economy, due to inflation. the article showed another graph to depict that the employment is at lowest as well in last decade, compared to any other decade.

In summary, the essential conclusion is ‘outsourcing’, which increases company profitability as they now pay lesser in wages. The result is in job loss and lowering of domestic salary due to competition.

It could be an interesting data to see if, as a whole, what difference outsourcing made to the overall GDP. Is the gain in GDP due to increased profitability overshadows the decrease in GDP due to Wage depletion?

If it’s not the case then outsourcing is doing harm to this country.

Apparently, outsourcing is a bad word in the political circle. Our politicians know that outsourcing pattern is not liked by the masses. Otherwise, why would Obama term Mitt Romney as ‘Outsourcing Pioneer’, as per Washington Post columnist?

“My plan will stop giving tax breaks to businesses that ship jobs and factories overseas, and start rewarding companies that create jobs and manufacturing right here in the United States of America.“

In the second report, CNN money stated that an absolute number of millionaires are on the rise again after the recession.

One reason could be the booming stock market which gained in double digits since 2008, making many stockholders millionaires.

Apart from that, the other factor could be the outsourcing again. Company profitability is producing many neo millionaires.

There are many self-made millionaires and small business owners who import goods from China and sell on Amazon/eBay, forget about Walmart.

Just make sure you have picked a trustworthy outsource partner otherwise you will face a lot of headaches with regards to trust and quality issues. Do your homework and it will save you from all the hassle.

Obama said the same line before as well, yet in last 4 years no law was passed and outsourcing is ever increasing.

If Mitt is a pioneer, Barack is not a stopper either. Ordinary people are also not exempted from my scrutiny. As a stockholder, you want to see your stock value grow.

You wish the company had more profit. Now in order to get you more profit, the company outsources which in turn costs your friend’s job. Very soon it comes down to your employer and job.

And, you start crying foul!

Not only in big corporate houses, even individuals, entrepreneurs, and small business owners outsource a lot of work overseas. Have a look at eLance or freelancer sites.

More than 80% of their provider base is in countries like India, Bangladesh, Pakistan, Nigeria, and Philipines. People do not want to hire a writer for $20 per 500 words when they get it for $5 from a writer based in one of these countries.

Although you might feel I took a side against outsourcing but, believe me, I do favor it up to some extent. I was able to come in this country because of the software outsourcing only.

Outsourcing is an important part of globalization. If America outsources to India, China, etc. These countries also outsource their purchase of heavy machinery and scientific instruments to America.

I would like to get an opinion from readers, what they feel about outsourcing and whether they got the benefit/victimized because of the outsourcing trend.

Readers, What do you think of outsourcing? Has it affected you yet?

Some links on this page may be affiliate links, if you make a purchase following the links, I may earn a commission. Read affiliate disclosure here
« Start Investing Now and Never Look Back
Taking Out a Short Term Loan for Emergencies »